We have done a fair bit of work on the engine over the last year and one of the last of the jobs we had identified was replacing all of the cooling hoses on the engine with new ones.  The old ones had been heat and age damaged and we thought we would take the pre-emptive step of replacing them all so that we didn’t have one go at a bad time and potentially cause damage to the engine.  At the same time, we wanted to resolve the slight oil leak at the front of the engine which we believe to be from the bolts on the engine.  We had reviewed the service manual, identified which variant of the Yanmar engine we have and then the replacement pipes had been ordered for us and we had these on the boat for quite some time before we could get the work scheduled.  Step one was to review what we had against the engine list.  We found that some of the ones we had were right but most of them were not!  Back to the drawing board on the ordering of the pipes.  We also agreed that we would get the key pipes sorted and then look at what was left after that.

Lindsay at Seapower has been great with us on this.  He knows our plans and knows we will have to be self-sufficient and so encourages us to get heavily involved in the work, for instance the last full service of the engine was done by me, assisted by Seapower (to make sure I didn’t mess it up!).

The pipe replacement process is quite simple but time consuming since you need to clean up where the old pipe was before you can put the new pipe in place. 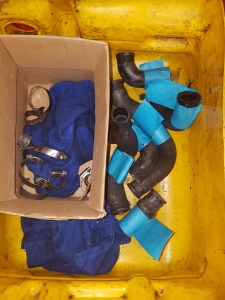 Some of them do not have great access so someone with small hands is best.  Firstly Houghton It is very important to completely empty the coolant before you start!  We don’t want a messy bilge…. Each removed pipe is labelled so that we know what we have replaced and jubilee clips are replaced as required.  As part of this work, various engine parts were cleaned up or replaced including the thermostat.  By the end of this process we will have a pretty new engine 🙂 it takes quite a bit of time to do all of this work.

the other advantage of getting this upfront and personal with your engine is you start to see other things that need to be addressed. A missing injector clip. No pipe running an overflow to the bilge rather than letting it spray all over the top of the engine if there was a problem. Poor running of the fuel pipe too close to the gear change lever which could result in wear on the pipe.  A nice new vetus water strainer opener attached to the water strainer so that we can take the lid off without using a red rope! All of these have been addressed and i think we are now in a position where we can have a little confidence in the engine, at least until the next time we have to do something!

Yanmar engine – why maintenance is so important