We recognise as we go round the world that every six months or so that we will be servicing the winches.  This regime hasn’t started yet and at the beginning of the week I was still very much a winch virgin.

We are fortunate to count as one of our friends Mat Jerram, who is a very experienced marine engineer, and as a friend Mat has imparted knowledge normally in exchange for copious food which has been a small price to pay. So on Sunday, as Maria was making roast dinner for all of us, he raises the fact that I have been talking about servicing the winches for a couple of years….and haven’t done it yet. Maria is twenty minutes from serving so it is enough time to break apart a winch and explain what to do! Mat explains the process really well and takes a look at the winches which have clearly not been properly serviced for some time (i.e long before we had the boat). There is a mass of grease on the entire winch mechanism and I now understand the process.

So the start of a new week and new jobs.  I get the lewmar oil, grease and spare pawl springs, as recommended by Mat, and now will service all of the winches. I start with the one that Mat had broken up on Sunday on the coach roof.  It all seems to be going fine as I clean up the winch using white spirit to remove the previous grease and grime.  I am able to keep hold of the pawl springs and even they get a good clean.  The whole winch was in a pretty bad state but not disastrous or close to failure. Having cleaned everything up, I apply oil to the pawls and move them around to spread it, they are moving really freely. I then apply the grease to the rest of the mechanism, a very thin layer so that it feels greasy to the touch but you cant really see the grease on it. Everything goes back together and I test the winch – all good. The second coach roof winch is in similar condition and the process is pretty much the same apart from the ping as one of the pawl springs goes flying from my hand across the boat and into the drink! Thank you Mat for suggesting that I get some spare springs.  This winch is somewhat quicker since I know what I am doing.  Quicker but ultimately flawed since it doesn’t work when I test it!  I know exactly what I have done, one of the units with pawls could go either way and I haven’t put it back in the right way.  Of course you don’t have to take the winch half apart to change this, the whole thing has to come apart to the base plate so that you can swap the part round the other way!  Retest and success, two down….SIX to go!

I’m on a roll, so onto the big sheet winches, knock these out in a day (amongst the other things I have on) and then the four small winches should be easy.  Unscrew the cap, take off the self tail mechanism and lift the casing off the mechanism. It moves a quarter of an inch.  Stop being a wimp and lift it! Quarter of an inch again. Last try, all my strength, quarter of an inch! At this stage, you look around for something to beat the winch with in true Basil Fawlty style.  Unfortunately there are no trees in the Marina, so I will have to come up with something else.  I find a couple of blocks that I can rig as a block and tackle. and attach set this up to the boom which I have swung out and tied off above the winch.  My trusty “red rope” (previously used for lifting outboards, freeing water filter caps and pulling pipes off through hull fittings) is at the fore as the attachment to the winch.  I tie it off using a pipe hitch and a round turn and to half hitches to the block, the tail of the line is then used to provide a second lifting point on the other side of the winch so that the pull is straight up.  I am ready to go and …..success….it moves half an inch! Success is measured in degrees when you have successfully lifted the whole winch by a quarter inch on three previous attempts.  I was happy to get it to a half inch on the first attempt.  Push it back down and pull again and it goes a bit further. I continue this making more and more progress until the casing comes clear 🙂 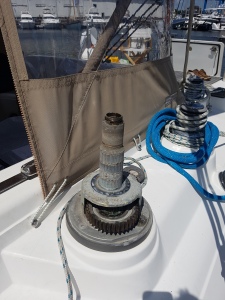 I now get to see what I have to deal with… The entire mechanism is glued together with calcium, salt and lots of old grease which has hardened.  The whole thing was solid and it is difficult to see how the thing moved in the first place.

The bearings are equally bad with no movement.  At this point I have to admit that the act of cleaning these things up and getting them back together is incredibly therapeutic and does give a great feeling of satisfaction when it is all back together again so thoroughly recommended.  When I was young I used to try and fix broken alarm clocks.  In common with a number of people I would take them apart and put them back together again, they never worked again and there were always a few spare parts lying around at the end of the process.  It is important that this isn’t the case when rebuilding a winch! A nice way to try and stop this happening is to be very organised as the winch is taken apart.

I laid out paper towel on the deck and had each group of parts on a single piece.  I found this really helped to make sure that I put it back together in the same order as it came apart.  As you can see, there was a lot of work required to clean these up and the whole process, with a few interruptions, takes a number of hours.  There is no way I am getting the second one done on the same day.

The next day, I set about the other sheet winch.  I have left the block and tackle rigged, I’m clearly going to need that.  This is going smoothly and faster than the first.  I get most of it apart quite quickly and I now have to remove five bolts, with alun key holes, that hold the tower casing onto the base.  On the first winch these were tough cookies but my rachet set up is equal to the task.  I get four off with quite a bit of effort and notice that some of them are a little rounded but they are off.  The last one looks particularly tight and the hole looks even more rounded than some of the others.  Even spraying with WD40 and PlusGas does not help this one to budge and as I try to shift it the wrench twists round and the alun key shaped hole is no longer alun key shaped but round 😦  For the moment I have to clean up everything that I can and reassemble the winch but I will need to drill out the bolt to finish this winch off.

The “half” clean up goes well and the winch works again so at least I can put it back together. I receive quite a bit of advice on how to get the remaining bolt out.  Cut a slot in the top of it and use a flat head setup to get it off, the idea being there is more metal to push against.  Another is to use a “screw extraction” set, which works by burying itself in the bolt and then as you tighten (it has a reverse thread), it loosens itself.  This probably works best when the bolt is not stuck fast into the hole. I cant get the screw extraction tool to bight into the stainless steel bolt.  Time for some help.

Lindsay is on board doing some changes in the engine room, more of that later, an offers to help me drill out the bolt.  Drilling out stainless is not lightly taken on and the trick is to have the drill on a very slow setting and take your time.  We drill out quite a wide hole so that we can get a large screw extractor in there.  I had previously been using the ones that you screw into the bolt but Lindsay’s set is driven in hard.  The large one works well and the head starts to move.  Unfortunately the screw is stuck so tight that the head separates from the rest of the bolt but at least I am now in a position to get the winch apart.  We use a smaller drill to get into the screw but this is still stuck hard so we have covered it with Plusgas which should help the bolt to loosen over twenty four hours.

That said, the whole area had been lightly bathed in WD40 and plusgas for most of the previous 72 hours so it may not be enough. That still doesn’t work so we will be leaving the thread in their for a few weeks soaked in plusgas and have a go at a later date.

Having temporarily resolved the seized bolt issue, I can now continue with the servicing of this winch.  This is as bad as the first with lots of cleaning required again to get it to a standard where you would be happy to reassemble.

Anyway, at least the other winches which should be uneventful since I have done the hardest ones first…. Or maybe not.  we have eight winches dotted around the cockpit and another at the mast.  Each pair in the cockpit are completely different and the mast is a two speed winch without a self tailor.

To be fair the servicing is not bad, except two of the winches are pretty much jammed due to lack of use and poor previous maintenance.

That is easily resolved and it actually makes it more interesting when you have to work out how the winch is put together each time.  Reassembly is also interesting and I was flummoxed for a few minutes when I put a winch back together and couldn’t drop the bolts into the cogs.  On inspection, the whole was out by 2mm.  Now that just isn’t possible, these things are precision engineered and when not covered in gunk go back together beautifully   I worked out that I had put one of the mechanisms in upside down and the two “same-sized” cogs were actually slightly different sizes.

So I am done on the cockpit winches, lets start on the mast one!  this is interesting and again completely different from any other winch I have done.  For the first time, I take the winch casing off and something drops out – that shouldn’t be possible.  It is a pawl, the part of the mechanism that gives the winch is familiar clicking sound.  That’s not good.  I get the winch assembly off the mast and onto the deck so I can see what needs to be done.

This winch is a two speed winch and it is the slower setting that has both Pawls broken.  I have bought some spares and so can set about cleaning up the winch and getting it back to perfect working order.  Now on my ninth winch, ten if you count one on a friends boat that I helped with, I am confident when putting it back together and it all works first time.

My top tips for winch servicing: