Then Lindsay said, “Let there be light”; and (after Olly had done his magic) there was light. Lindsay saw that the light was good; and separated the engine from the darkness.

So the Seapower marine double-act have continued to give the engine room some much needed TLC.  It was impossible to see anything in the engine room, no matter what time of day, without additional lighting.  We agreed that if we really want to know what is going on we will need some LED lights to brighten the area and show up the dark and sinister secrets.

In the last two weeks, 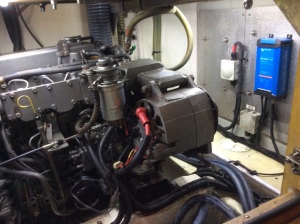 the engine has also been run for approximately 10 hours with no overheat issues which has been reassuring.  With a clean engine room floor, we would also be able to see if anything was coming out of the engine and so far we seem to be in a good place.  It now means that Maria is confident again

Step 3 is a thorough going over of the engine itself which will replace old and wearing pipe work and check that we are in a good place for the future and our dream trip.

One thought on “Sorting the engine – step 2”