Mariadz is quite a large yacht and the saloon is a very comfortable area to sit.  We have always been keen to modify her to make this area more comfortable or nicer to look at.  I think you could argue that the saloon table itself is a work of art, but with a large area of wood on the wall behind the seating, we were keen to break this up with something spectacular.

For a number of years we had discussed a piece of art for this wall, inspired by the Moody Mornin’ Gorgeous that we looked at when we bought the Moody 54. In  fact we had previously commissioned a picture from an artist in Long Milford of our last yacht, the Dufour 455. It was amazing as he put together various different elements to form a picture of “our” boat that had never been taken. The picture was good but a few months ago we went to a small exhibition at Ipswich marina of a local artist, Anne Plummer.

Her work was jaw-droppingly good.

We had been lucky to meet Anne and her partner Mark on another friend’s boat relatively recently, Mark from Motion. So we already knew that she was a nice person even if we were unaware of her unbelievable talent.  At the show, we made our decision that Anne was our artist for the signature piece of art for Mariadz.

A few short weeks later we spoke to her about the commission. 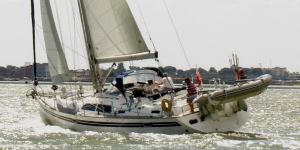 We have a picture from our first weekend sailing which is a dynamic picture of Mariadz sailing at 8.5knts down the Orwell.  We asked for the enhancements we had made to be included such as the solar panels and the rib.  In response, Anne had said no outboard on the rib… “they’re ugly”, we also discussed whether the water should be “Orwell brown”, perhaps not! 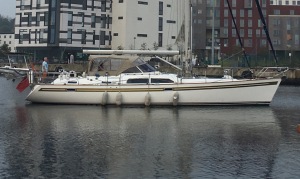 Based on these two pictures, Anne was able to do some initial drawings.

it was clear straight away we had made the right decision on our artist. 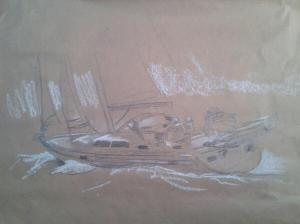 The first sketches showed the power of a yacht and really teased us as to how the art would look. A few short weeks later and the work was done. Anne had deliberately made sure that the painting didn’t look like a photograph and the key to knowing that it is an original Anne Plummer is that there are cat hairs within the painting. More proof that we had the right person!

So then we had to think about framing. In these instances, you have to ask an expert, and so Anne’s opinion was important to us.  After a long discussion, Anne recommended a couple of framers in Ipswich. We visited M F Gallery and Framing, and spoke to Owen.  Anne has work hanging in the gallery and is well known.  We discussed the decor on Mariadz and agreed that the frame should pick up some of the new wood that we had in the saloon, namely the maple. Owen was really helpful and we have heard some good reviews of his work. The maple had to be ordered in but a couple of weeks later it was all done and up on the wall of the saloon.

So now we have an original Anne Plummer! I have to admit I am in awe of people with genuine talent like Anne and I can’t help keep looking at the picture and the detail she has put into it. 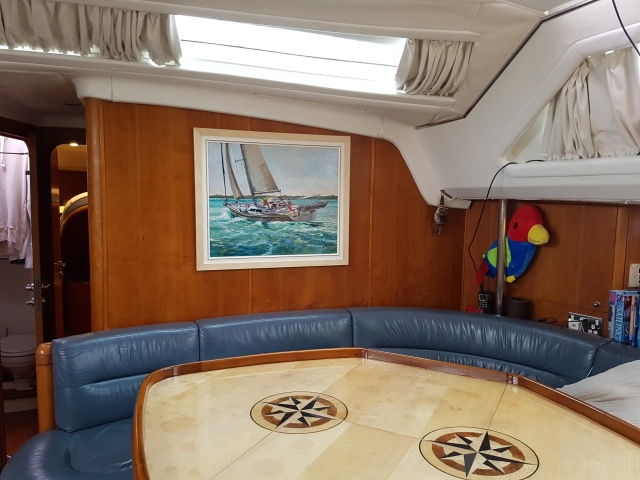 2 thoughts on “Our very own “Anne Plummer””