Well there we go I have brought up the dreaded T word -TV.

There seem to be a number of schools of thought on this.

However, we have always been very keen watchers of films (movies for our American friends).

This work was originally done in 2014 when we first got the boat but has had to be refreshed.  When we got her, the boat had a 20 inch TV permanently fitted in the saloon, 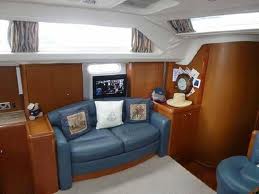 now we like watching TV sometimes but a) how will you see that from the other side of the room and b) who would want the TV on display the whole time anyway! When we had viewed the Moody 49, Mornin’ Gorgeous, prior to buying ours, we had admired the simple setup that hid the TV safely behind the seating. 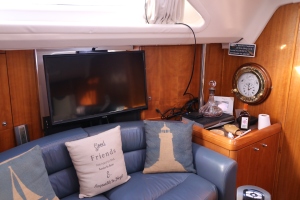 That was now our solution and it would allow us to have a large enough TV that we could both see and watch films on.

However, what TV to fit. At the time we did not have an inverter and I am also keen on a 12v solution to the problem. We had done something similar on the Dufour and bought a British made, or assembled, TV (Cello). This had worked really well and had a built in DVD player. When I looked at the options the largest 12v DVD TV that Cello produced was a 32inch, now that’s more like it. You certainly wouldn’t want the TV on display the whole time since it takes a lot of space.  One downside on these TVs can be the sound quality but there are a number of solutions to that these days including soundbars and we bought a cheap sound bar.

Unfortunately my suggestion to emulate the simple, and cheap, solution for lifting and hiding the TV that we had seen previously received some criticism from my co-skipper…. 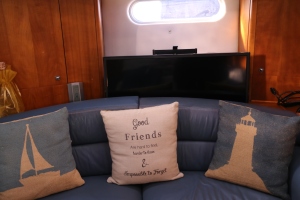 So we looked at lifting cages with remote controls that would achieve the same goal, somewhat more stylishly. These cost more than the TV :(. But work really well and are more stable – quite useful for a boat 🙂  In the end we went for the Venset TS700A.

So now we have the means to watch whatever we like, even home videos of dolphins playing next to our bow :).  Even better than that, if we don’t want the television up, it is hidden away and not obtrusive. 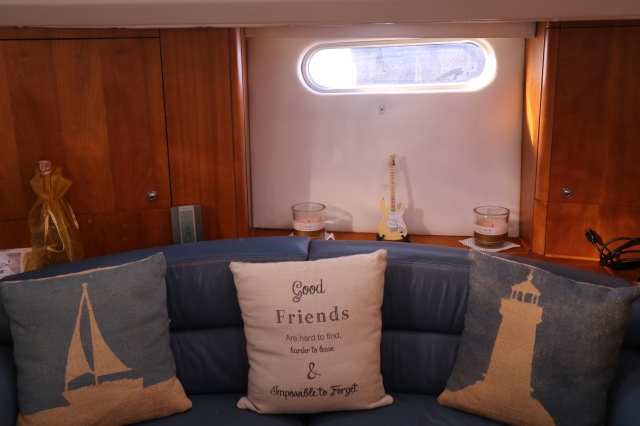 We originally bought two of the Cello TVs and mounted the second in the bedroom of the motorhome (now that is excessive!).  Unfortunately, after eighteen months of not very much use, the screen went black on this TV so I was left with a decision to make.  In the end I decided to swap the Cello out of Mariadz and use it in the motorhome.  This limited any issues I would have with changing the power cable and the mounting.  However, I then had to choose whether to get another Cello for the boat or whether to go for something with a better reputation.  On the motorhome, we had the Avtex 187 TV (now Avtex L188DR 18.5-Inch Widescreen Super Slim LED TV with Freeview HD

for our bedroom.  These are very good quality TVs with excellent resolution, a built in HD Freeview and satellite tuner.  I have also been very impressed with the customer service throughout the three year warranty period which has the TV collected and then returned by courier within a few days.  I decided to go for the Avtex L327TRS Super Slim LED Digital TV with SAT-Freeview and Record – Black, 32-Inch

. Unfortunately, the original fitter for the lifter had kept the bars that allowed the larger TVs to be mounted so I needed to get some stainless bars made up by East Coast Stainless to help with the mounting.  We are very pleased with the result, in fact the earth loop, the buzzing noise from the speaker, also does not happen with the Avtex – that was getting a little annoying!

One thought on “Entertainment (TV on a boat – yes I know, sorry)”