One of the final jobs of our lift out was to clean up the hull, superstructure and deck.  As part of this we identified a few things that needed to be addressed.  Although cosmetic, this work adds some finishing touches and makes Mariadz look even prettier 🙂 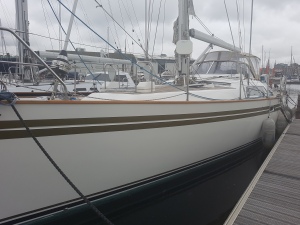 The hull polish went very well and is a quick job because the surface is mostly flat. She came up beautifully.  The gold vinyl stripe, which we intend to change next year to a painted stripe, is looking fine despite having been in place for over four years. So we can survive another year of that without doing anything major.

The superstructure needed some work and in fact we had some areas that needed a lot of work.  Particularly on the aft deck where the raised “sun-bed” area, meets the deck. The GRP at this point was “crazing”.  We were concerned that this would need a new layer of gelcoat to resolve but speaking to our local GRP specialist, Terry Clarke, 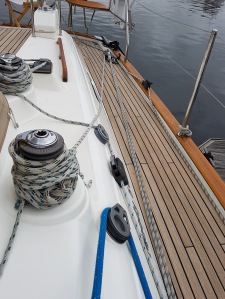 we discovered that this needed very fine sanding with 400 and then 1000 wet and dry sand paper…… very gently!  The dark crazing was removed and, after polishing, this area looked like new which was refreshing considering this had been a bugbear of ours for a few years.

The final job was the teak which was cleaned and brightened to give it the brown look that Maria loves, lets see how long that lasts!  Unfortunately, as we went round the boat we discovered that the teak seating in the cockpit area is 0.5mm thick in places.  Although it would be possible to do some minor patching and fix the caulking, this would only be short term.  So we have decided that we need to do this properly and will replace the teak in the cockpit.  I spoke to Watts and Sons in Northampton to get a quote which didn’t seem unreasonable so we haven’t repaired the cockpit and will do the job properly when we have the chance.

In between the polishing and the teak work, we had a weekend and went sailing to Osea Island.  I got into trouble on my return for not cleaning down the hull well enough and leaving a layer of salt on the beautifully polished hull.  Sorry Terry, I promise it won’t happen again 😦 and Maria now has her watchful eye on me to make sure I don’t fail again :). The final point is how do we keep her looking good….. regular washing with a car shampoo will be our technique, definitely no using Fairy liquid which would strip the wax off very quickly and make her dull.  Hopefully that will help Mariadz stay pretty for another year.