Maria has a sneaky plan that she thinks I don’t get. Each year when we go for our two week summer holiday, she steals an extra day or so. Last year, we left in mid week so that we arrived in Italy for the weekend.  This year, Maria has booked us into a place in Kent so that we are closer to the tunnel – we are leaving on Monday!

i can’t begrudge her this though, since she is working incredibly hard at the moment and the weekend prior to our holiday was working through the night with three hours sleep a night. While I am not working. Not good, not good at all. So Maria needs a break and this will coincide with Mariadz coming out of the water to have some work done that is best achieved without us on board. I had washed the motorhome a few days ago so he looked good for the trip (he is a 4.25T van, he’s a big bruiser, can’t be a girl…..).  In Maria’s absence through work I have everything on board the motorhome and Maria has been able to put everything away ready for our trip.

So the plan is to spend a couple of days in Kent, where Maria can work, prior to getting the Eurotunnel across the channel.  On the first night in Europe we expect to get as far down as Reims, adjacent to Paris but on the route down to Italy.  This year we have decided to go through Switzerland, partly because we bought the annual pass in January when going skiing and also because we found the scenery quite spectacular as you go through the Alps past the Italian lakes. Our second overnight stop may well be Lake Como.  This will give us a long day down to Puglia where we can stay for the two weeks.

Step one is get the cats on board. This isn’t easy. Mariadz is coming out of the water and so I carry both cats to the motorhome. By the time I get back to the boat, Clyde has joined me on the pontoon as Mariadz slips out of the berth. Clyde looks a little lost if I’m honest but next to us is an old wooden boat covered in a tarpaulin, the cat’s playground so to speak.  he’ll go in there for a while until we call him.  I go around to the lift to watch our pride and joy be carefully put onto the hard where Maria joins me. Unfortunately, Bonnie had decided to walk with Maria most of the way so now neither cat is anywhere near the motorhome. With Mariadz settled, I start to head back since today, of all days, I have to go into London for an agency interview. Maria intercepts me….both cats are down where Mariadz should be looking lost!  We both go to retrieve them and get them into the motorhome, hopefully they will get the idea now, and ten minutes later, Bonnie is asleep in her bunk and Clyde is asleep at his mistresses feet, he really does think he’s a dog! I am late but disappear into London for a couple of hours, while Maria gets the washing done and sorts out the van.  This is despite being really tired and keeping up to date with her work, she is a good girl really!

On my return, we finish getting ready and by 6:30pm we are ready to leave.

Maria is so tired she sleeps most of the way there with her cat also asleep on her knee. You will notice the pillow and cushion setup.  This is because the cats are so happy here that they pad on Maria’s legs.  Without the pillow, Maria’s screams were a little distracting for the driver.  Clyde will stay there for most of the trip down to Italy and whenever he leaves Bonnie jumps in.  So Maria always has feline company on our motorhome trips.

Some people have suggested that for safety, in case of an accident, the cats should be in a cage.  Our view on this is that the cats are trained well enough not to bother the driver so there is no safety issue there.  The problem with a metal or hard cage is that, in the event of an accident, the cat is hitting metal bars at 20 miles an hour which is going to cause massive internal injuries.  At least in the van with the amount of soft furnishings we have around for them, there is a good chance they will land on something that will break the fall like an airbag.  To be fair, rule number one is not to have an accident!

So Clyde has his favourite place and Bonnie has hers too as she likes to sleep in a cubby hole above my head.  She can see us but again spends most of her time relaxing or asleep.  We have noticed that the cats are very affectionate in the van but they know not to go near the driver so I don’t need to worry about them and Maria likes the attention.

Tonight we are driving down to a pub/campsite close to the Eurotunnel called the drumm inn. The satnav says a shade under two hours to get there and Maria gets a good rest on the trip down. We have left reasonably late so we are approaching the Thames crossing after 7:30pm, so we have missed the rush hour and the traffic. On the way I continue our mad waving at other motorhomes especially Autotrails.  It is more difficult on the motorway because, unlike single carriageway, you are not in their normal field of vision so I get no returned waves despite seeing about six motorhomes 😦 Another hour and we are approaching our destination.  We phone in because the kitchen closes at 8:45pm and place our order on the phone.  If I’m honest the menu isn’t that inspiring, with a lot of chips, and a mark of the specials board was that Maria didn’t even bother to tell me what was on it, that is uninspiring! That said, you don’t need to eat in the pub.

Initial view of the location is very good.  The pub is a nice old building with access to a field at the back which is well looked after with power and facilities.  Security is covered by two locked gates with different codes.  The only potential issue is quite a steep access road to the back car park, which has tell-tail scrapes in it. We get in ok but I will need to be careful when we leave. We find a nice spot with a few other motorhomes and caravans around and we have arrived as expected before the kitchen is closed.

Unfortunately, the food isn’t great, which is a shame when you look at the setting – the pub would have a real opportunity to be a popular stop-off for people going for the tunnel, and we have seen these questions on facebook a few times.  That said, when I mentioned that my lasagne wasn’t too good, the barman agreed and knocked it off the bill so good customer service, even if the quality in the kitchen can be improved.

So this is our stop-off for a day or so while Maria works before we go on our way to Europe.

and the cats seem happy…..well Clyde has already been ten foot up a tree and then looked a bit sheepish! Bonnie has also had some tree time. 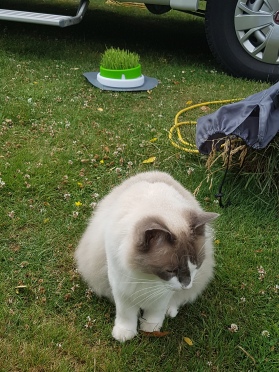 Our second day at the Drumm Inn is quite different. It seems that most people stop off here for one night usually on their way to the Eurotunnel. Our neighbours for our full day, while Maria worked, were two caravaning couples who were going to the sidecar racing. Michelle and Phil Luhr with Hayley and Gary Evans with their beautiful sheepdog Oscar.  Poor Oscar is scared of cats and was generally looking quite warily over to the van as the cats looked back. Oscar had an even harder time in the pub that evening though as a couple of kids decided that they should boss him about. He handled it really well and just wanted to chill! After the previous evening, we were a little apprehensive about the food, but noticed the Mexican menu and had a couple of things off of this. A resounding success, the creamy chicken burrito was gorgeous! All in all we had a lovely evening.

The next morning, Maria has a shower in the ten minute, timed shower but there is only one shower and it takes old one pound coins. We only have one old pound coin but our neighbours come to my rescue with an old coin. Maria is out of the shower and myself and the “two girls” are all going to the shower at the same time, it’s obviously a friendly camp! My wife has often said to me how quick I am….in the shower.  The girls are not disappointed as I am in and out in under three minutes although I am not sure if this is something I should be proud of!  One thing we enjoy about motorhoming, like sailing, is how friendly everyone is and we have a lovely chat with our new neighbours before they continue their journey.

Unfortunately most of the morning, it has been raining and we have all had to stay inside.  Where we are going the weather is looking a lot better…. 🙂

4 thoughts on “Maria needs a holiday”