On Mariadz, we have a 32Kg Rocna anchor and so we like to go out on anchor a fair bit. Just before we bought the Moody, the windlass failed and the previous owners had to replace it a few weeks before we took possession.

To be fair, it was pretty much the only thing that worked as it should when we got the boat 🙂

However, we shouldn’t get complacent about the windlass especially as that is four years ago now!  Previously I had serviced the Lewmar winches and so I was quite confident about the Lewmar windlass, especially with an electronic copy of the owner’s manual, with servicing requirements, to hand.  One of the jobs for the future is to replace the anchor chain which is 12mm ISO (as I know now having taken apart the windlass!), but the chain is rusty.  This rust obviously flakes off as the chain is brought in which means that the windlass is probably covered in rust.  Taking the windlass apart and this is exactly what I saw. 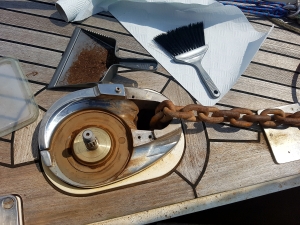 The base of the windlass under the gypsy, that reels in the chain, was covered with rust dust, as was the gypsy itself.  I cleaned up all of the constituent parts of the windlass, much fewer than a winch.  On the gypsy the cleaning uncovered 204 which is Lewmar code for a V4 windlass, hence the 12mm chain!  Once again, I found the parts to be covered in thick grease and, like the winches, I cleaned this off and then reapplied a very thin covering of new Lewmar grease.  Putting it back together is five parts and three bolts, couldn’t be simpler. A quick test and it’s done.

Servicing the windlass is incredibly easy and like the winches rewarding.  When we go travelling we will be anchoring a lot and the windlass will be really useful.

However, you also need to have plans for how to retrieve the anchor if the windlass has failed.  The windlass does have a manual pull with the manual lock (left hand side in the picture) acting like a brake to avoid the anchor dropping again.  I think you also need a solution if the windlass is completely shot. Our solution is to use our long snubber with a hook, taken all the way back to one of the sheet winches.  This will allow us to pull up ten metres of chain at a time using a winch.  We haven’t tested this in real life yet, we don’t want rust all over the decks, but the theory seems sound and we will test it as soon as we get our new chain.