When we started this blog, Maria did promise to write some recipes as part of the blog.  Eighteen months later and not a sausage, so to speak!

It is somewhat fitting that the first recipe to go up on the site is for an alcoholic beverage, our homemade limoncello.

In the UK, 95% alcohol is banned, probably because UK teenagers (we were once!) would probably try and drink it neat as some kind of test of bravery!  We bring ours in from Italy, which is allowed, for personal use.  So what do you need:

Firstly, peel the unwaxed lemons and keep the peel.  Split the alcohol into two using a couple of litre bottles, preferably with a wide neck, the reason will become clear later.  Put the peel into the bottles equally.  The next part is contentious, (some people don’t do this!) add the juice from the lemons to the alcohol… the peel has enough in it to create the taste but the juice makes it more “lemony”.

Now leave it on the side for two weeks shaking and turning it each day.

Two weeks later, it is time to put everything together.  Firstly we need to get our flavoured alcohol out of the bottles and put it to one side for a moment.  We will use these bottles for the limoncello so the peel needs to be emptied too, this is difficult because the peel will have become stiff and it will try and stay in the bottle, hence the wide neck on the bottle so that you can get fingers, chopsticks etc into the bottle to get the peel out!

Put the water into a large pan and bring to the boil, add the sugar and keep simmering until the sugar is dissolved into the water.  Take the pan off the heat and add the flavoured alcohol.  This now needs to be left to cool but first have a taste to check that the mixture is not too bitter. Only a taste kind! If you need to add more sugar then make up a sugary paste with a little boiling water and then mix this into the limoncello.

Once cooled, the limoncello can be put into the two litre bottles with some left over for the alcohol bottle.  The bottles can then be put into the freezer so that it is served cold.  The final product is about 35% alcohol so be aware if you decide to sit down and have a few of them! (for the pedants…that might be you Dad 🙂 …, the lemon juice is what brings the mixture down to 35% from 38%! 🙂 )

This works equally well with oranges but remember they have to be unwaxed.

We are now experimenting with a cherry version where the de-stoned cherry is added to the alcohol.  We will update with how this works and the measures. As you can see from the pictures we used a lot of cherries!

And of course label your bottles up and get ready to drink straight from the freezer. 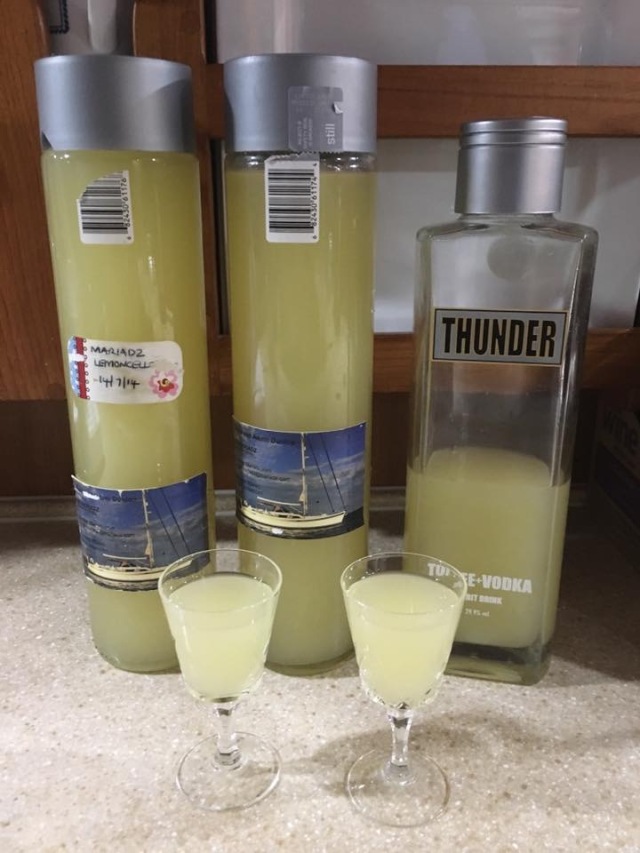 One thought on “Limoncello and the Cherry equivalent”