When we bought the Moody, it had a very low quality cooker on board.  Again, we suspect that this was as part of the refit after the galley fire caused by a dehumidifier long before she came to us.

Maria hated the one that had been fitted.  It had control buttons on the top, which meant that the pans on the hob pushed the heat sideways and you would burn 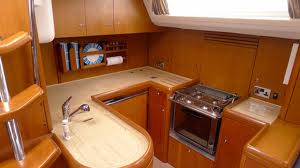 yourself on the control when you tried to adjust the temperature.  There were also issues with how long it took to cook, with Maria’s roasts taking five hours to make!  Something was going to change.

Maria looked at a lot of different cookers as part of her replacement strategy.  She would keep going back to the stainless steel GN Espace range.  These are designed and built in the UK and are now fitted on a number of luxury yachts. 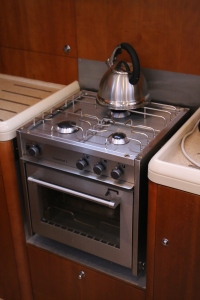 Looking at the range decided that the OceanChef 3 was a good fit in the space that we had in the galley.  As usual it wasn’t an easy fit, although the cooker fitted perfectly into the space, it was a tight fit and we needed some work done to get the cooker to gimbal correctly.  The size of the cooker does mean that it will not go past 30 degrees but if we are trying to cook with that much roll then we are probably doing something wrong!

There was also a minor issue with the gas line that had been kinked and was not letting the gas flow.  Once this problem was rectified, the new cooker worked exactly how Maria wanted it.  We also added the stainless back plate for cleaning and heat protection.

Finally, we needed to have dehumidifier if we were going to live aboard or we would suffer from condensation and damp issues.  In the end we bought our second Meaco DD8L Dehumidifier

which was great on the boat and in Italy.  We actually use it in the day heads rather than the saloon and also use this room for drying clothes.