When we initially viewed the Moody, on the hard, we understood that the tarpaulin over the boom was a means of protecting the boat from bird droppings.

Apparently the word gullible isn’t in the dictionary either.

Due to travel and work commitments, we couldn’t collect the boat from the Solent to bring her to Ipswich and so we engaged the services of a skipper and crew to sail our Dufour down to the South Coast and return with our new Moody. The weather was pretty poor for this journey and it rained for most of the trip. The wind was also on the nose both ways (own often does that seem to be the case?)

It was therefore a little bit of a surprise when the Moody finally arrived in Ipswich to find a distinctive damp smell and the bilges full of fresh water. The culprit was a window leak….all of them! So that explained the tarpaulin 🙂 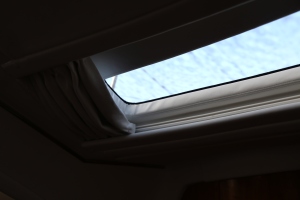 . The inside of the windows is accessible if you take down the headlining but initially we decided to just do the outside to start.

Three years later we have not had another leak from any of the windows despite some variations in hot and cold, a lot of rain and some green water over them.

Unfortunately the leaks had caused more damage to the headlining which was literally falling off in places because the water had got behind the headlining and the glue had failed but that was another day and another job.