We had decided that we wanted to cross the channel again and we asked Lisa Jones if she would join us.  I’m sure that Lisa won’t mind me mentioning that she was in recovery from treatment for Cancer (we will always have everything crossed for her). Lisa has only been on sailing boats called Mariadz but has had some help from Martin Hubbard, our yachtmaster and guru, and understands a fair bit. So our happy crew of three head off from Suffolk Yacht Harbour, where we had stopped the night before, in the early hours so that 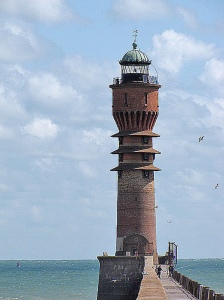 we can arrive at Dunkirk, a new port for us, in daylight. We have a fantastic sail over, Mariadz is flying, at eight knots, beautifully balanced and we even get through a number TSS, or motorways of cargo ships, without a hitch.

A number of hours later we arrive off the coast of France and approach Dunkirk. Dunkirk entrance has a large lighthouse with three bands and on the other side we have probably the most famous sea wall in history. We approach in glorious weather with the sea and sky a bright blue. We decide to go into the furthest Marina, Yacht Club de la Mer du Nord (YCMN). On approach, and having consulted our reeds and channel pilot books, we spoke to them on the radio and were allocated berth 6. Maria is behind the wheel on approach.

Stopping there for a moment. Maria and I were married and on our honeymoon we chartered a boat owned by a husband and wife.  We noticed that the wife was generally behind the wheel when manoeuvring and since this is quite unusual asked why.  The response was basically that you should always have the most physically adept doing the lines because inevitably something will go wrong in these situations and you want the person who can limit the damage physically being there. From that point on, Maria and I agreed that generally she would do the pontoon bashing and I would do the lines, anchor or whatever. Of course, Maria is actually very good behind the wheel so I rarely have to do anything exciting but in keeping with our cautious approach, we have stuck by this decision.

Meanwhile, back at the plot, Lisa is keen to help and so we set up lines ready to come in.

We will be coming in astern and so I suggest that Lisa owns the bow line and I will deal with the stern and mid line. Firstly though, we have to find our berth. This is easier said than done, the marina is very tight for a 45 foot yacht although I am guessing the theory is that if you have something that large then you should have learnt how to use it. We cruise slowly down the aisle that we have been assigned looking for berth 6. They are not well marked (and that will be Lisa and my defence til our dying day!). We find a gap between the finger pontoon and another yacht, the only gap we have seen, and both Lisa and I look at it and we see a six.  Job done – “Maria, it’s this one”….then we look again. Looks a bit tight…..he definitely said a six…..it must be this one! I go towards the stern, my station as we are about to come in, as Maria stops Mariadz in her tracks. I get to the cockpit and Maria whispers to me “Ad, how am I going to get it in there?”

Now, the advantage of Maria being behind the wheel all the time, is that when she asks me these questions I can give an answer without fear of actually having to perform the manoeuvre I have just described.

“Well, darling, just point her at the gap, tick over reverse and the steer her in using the bow thruster”- it was incredibly tight! I then look at her quizzically as if to say “but of course you knew that darling and it is the most natural manoeuvre in the world”.  The aim of this is that she will confidently “throw” Mariadz into the berth with no problems. Mind-games 🙂

Maria looks at me as if to say, “well of course that is the way, I guess I’ll just go and do that then” and I stand behind her a relieved man. The alternative, of course, would be “if you think it is so (expletive deleted) easy, the why don’t you do it yourself, you arrogant (expletive deleted)”. And queue an unhappy crew for several hours irrespective of the result.

Maria pops Mariadz into astern and the Dufour starts to gently move towards the berth. She is perfectly aligned and just giving a little burst of the bow thruster to ease her in. I have taken my position, lines in hand, ready to tie her up – it now looks incredibly tight but Maria has got it completely under control. We ease into the berth, did I mention it was tight. Lisa notices how close we are to the yacht next to us and mentioned that the fenders will hit each other. We decide that we will move ours out of the way as required and Lisa comes amidships to do that. Maria is still in astern but has to put a little more power on because the fenders are providing resistance. It is still a beautifully controlled manoeuvre. At this stage I have seen the number of the berth clearly…….oops!

We are now in the berth and I step off and take a look. We are wedged in resting on our fenders and the fenders of the boat next to us. It almost seems redundant to tie her off but of course we do. Lisa has taken her bow line and done the same and we walk back to the stern together. “Don’t look at the number…..”. Maria is doing her chores: engine off, spray hood up etc. Lisa asked “should we tell her?” And we agreed to wait to see what the harbourmaster said. Lisa and I cheerily mention to Maria that we will just go and report in.  As we walk up the pontoon we see berth 6, a very wide easily accessible berth but a little near the end with a large motor launch opposite – we tried to convince ourselves that it was harder than the one we were in.  In the harbourmaster’s office, I am incredibly apologetic and I use all that experience in the headmaster’s office to good effect. We misread the number, we’re so sorry, what do you want us to do (please don’t ask us to move, Maria will be doing that manoeuvre with Lisa alone having already killed me!). The harbourmaster is very Gallic and relaxed, it is not a problem for me if it is not a problem for you, but I will come and take a look.

The three of us walk back to the pontoon and Mariadz. As we come up to Mariadz, he stops and does that incredibly French thing of frowning with a down-turned mouth whilst nodding sagely. He looks at Maria, there is a nod of respect (how hard-earned are those from a French harbourmaster!). He takes a look at the other side, “I have no problem, if you have no problem” and marches off back down the pontoon.

We have moored at a few places and Maria was clearly surprised to see the French harbourmaster coming down the pontoon so Lisa and I decide we have to come clean. We admit that although containing a six, this may not be the berth that the harbourmaster first had in mind but we’re here now so all is good.

We have a lovely time in Dunkirk, eating lovely food and having a few drinks. If you have a smaller yacht I would strongly recommend this Marina for location and also atmosphere. The weather is glorious and of course I haven’t put any sun screen on so by I now have a large red beacon of burnt skin on the end of my nose.  All is fine and we have a nice meal on the boat and a few drinks the day before we are due to leave.

Of course, the return journey on Easter Sunday was another matter completely…..