So we had bought the Dufour and had a number of lessons from experienced skippers. It was time for us to take our first steps across a sea.  But we may have had the training but we certainly didn’t have the confidence yet.

Our good friends Richard and Janet of Easily Led had spoken to us about the next step in our development. We discussed going for a longer trip than our current trips out to the North Sea so we agreed to join them on a trip to Dunkirk via Ramsgate for a long weekend.

Lisa Jones joined us as we headed off on the Friday night to get down the river and stay at Suffolk Yacht Harbour. Here we were meant to be meeting my best man from the wedding, Zimm. It had to be early because we had a really early start the next day. Needless to say, Zimm wasn’t early. And of course we hadn’t seen him for ages so we didn’t get to bed early because we all wanted to catch up.

So it’s 4am the next morning, Mariadz is quiet. We’re due to leave. So Maria and Adam get up in their pyjamas and cast off. Maria is at the wheel, there is a need to check around the boat for lines, fenders etc. As part of these essential checks, Maria  feels a large weight on her head but soon realises it’s nothing to worry about. 🙂 Adam has a slightly different hangover to Maria…..

We set off in the calmest conditions I have ever seen in the channel, but it was our first time sailing in the channel, so that may not be saying too much. The sea was like glass without a breath of wind and so we had to motor all the way to Ramsgate.  That wouldn’t have been so bad except it became clear after a couple of hours that we were not getting enough water into the engine.  There was a minor blockage in the pipe that feeds sea water to the engine, this meant that we had a little steam in the exhaust.  It wasn’t bad enough to stop us on our journey or overheat the engine badly but it meant it was difficult to keep up with the lightening acceleration of Easily Led. The trip to Ramsgate was chilled but does take several hours. We were little more than 30 minutes away from Ramsgate when our “crew” came up to help. “So where are we then and what can I do”. Not masses cos we’re arriving in Ramsgate now. 🙂 it was quite amusing to do the whole journey on on own while our guests slept.

Part of the reason for going to Ramsgate was to try the excellent Thai on the front the Thai Orchid was wonderful. This was our first time but we had heard good things and we absolutely love the place.

So the next day we set off from Ramsgate and the weather is as still as you like. Now the channel is one of the busiest sea areas in the world. Going across the motorway that they call the TSS is like playing frogger – one for older readers (if you’re young look it up! 🙂 ). So we are nicely in convoy with Easily Led in the lead. At this stage, Maria and I are feeling lucky because we have found friends who are prepared to help us in this way when we need it. Like all good friends you never forget what they did.

We are about to enter the TSS with large ships hurtling past, we are literally seeing up to ten ships, every one could be on a collision course. At this stage Easily Led came on the radio, “we have a problem….”. They have crossed a fishing net and it has caught on their propeller, hey that is no problem they are a sailing vessel….except there is no wind! Easily Led is lucky, there is a willing, if inexperienced, crew nearby who can provide help. As a true seaman, Richard is only prepared to offer a line for the tow, you can’t accept a line from the “salvaging” vessel…. We took up the tow and started the long journey back to Ramsgate at a very slow pace with a slightly steamy engine…. All the time,Easily Led are in touch with the U.K. Coastguard who are offering help as required. After a few hours it is clear that the return journey is going to take a while and the RNLI are dispatched. 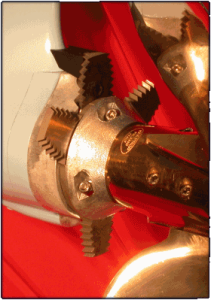 At this stage we are grateful for the Ambassador rope cutter fitted on the Dufour, we knew this had saved us in the past because you can feel it working. Amazing piece of kit. On the Moody we have a circular rope cutter without the teeth, hopefully it will be as effective. 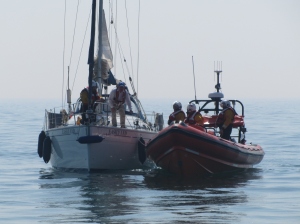 The picture shows how still it is as the RNLI  rib comes along side and takes up the tow. A burly and highly skilled RNLI crew member comes aboard to secure the tow and to make sure that the boat and crew are  safe. The guys are brilliant and are able to bring Easily Led into Ramsgate in double quick time. Our crew may not have made it across the channel but they experienced a great adventure.

Below, a sailing vessel archieves planing speed…… With a little help from their RNLI friends..but still with their French courtesy flag raised, as they head to Ramsgate.

We return to Ramsgate. We like Ramsgate but we had hoped to be eating mussels. 😦

Easily Led is being lifted out to have her prop inspected and so, as any good sailor would do, we offered to take our good friends home recognising that they would then have issues sortimg out the boats problems but this is probably easiest from home.

So we now are now a big crew on the Dufour. We have Zimm, Kirsty, Lisa, Maria, Adam, Richard and Janet.

So where do we go from here. The choices after an aborted trip to France are Burnham or Brightlingsea.

After a lengthy discussion, we decide to head to Brightlingsea. We are now a full crew, at this stage it became clear that we had to have a lesson on the use of our plotter and Richard was our man. Unfortunately, we clearly had a different version of the plotter to the one Richard was used to.  We were able to create waypoints but seemed to be struggling with joining these together.  The problem of course was when we reached a waypoint. It would seem to be simple to move us to the next waypoint but there had been some confusion. Mariadz, did an immediate 180 degree turn. That didn’t go down well with any of the crew. We were able to switch off the autopilot and return our course towards Brightlingsea.  But we didn’t underestand how it could have gone wrong so the autopilot was engaged again – another 180 degree turn, almost losing some of the crew. No more autopilot.

We arrived at Brightlingsea and told Richard Davenport that we were in his neck of the woods. Richard owns a fantastic kitchen company, not cheap but then quality doesn’t come cheap. You can spend a lovely couple of hours just drooling over his lovely kitchens. We met with the whole family and had a wonderful evening,

The next day we flew up the wallet next to the wind farm and arrived back in Ipswch mid afternoon.  On our return to Ipswich, we tidied and cleaned the boat as always. There was ice below and Maria asked one of our guests to dispose of the ice. This was clearly confusing because the question was asked of Adam, cleaning the deck, what should we do with the ice…..I just looked over the side of the boat, it’s water – the ice should be fine 🙂

The end of a wonderful first weekend’s sailing.