We’ve been lucky to get out quite a bit recently but eventually there comes a time when you need to just make sure everything is ok. So no more fun and do some maintenance.

This weekend was our opportunity to do this.  We had noticed a little oil which had mixed with water in the engine room and although there was only a little, we had decided that this needed to be fixed.  Unfortunately, the source of the oil issue wasn’t apparent so step one was going to be cleaning up the engine room so that we could definitively see where the oil was dripping from the engine.

which soak up the spills really well.  Don’t tell Bonnie and Clyde that they are puppy pads. These allowed me to clean up most of the mess.  That makes it sound easy.  The difficulty is that although Mariadz has some room around the engine, it is not ideal and to dry the floor under the engine, you have to jam yourself between the door and the alternator and try and reach under the front of the engine.  Being a short-arse with short arms and not as thin as a rake doesn’t really help.  It means I am dabbing down the pads using a straightened out hanger but it seems to work.  Having dried out the engine room I then threw some detergent and a little water in to remove any residual grease.  This just feels wrong after you have spent ages drying it out! 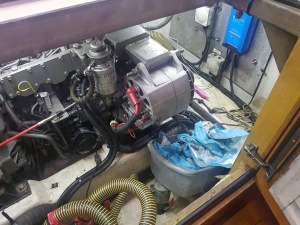 Not least of all because of the alternator shaped imprint on your chest from having to lean on it for so long stretching to dry off the bilge. Interestingly, the mess looked worse than it was with the oil mixed with water. Not so bad an oil problem but the water is another problem we need to resolve. After quite some time, the bilge is squeaky clean which is also a shame because I know it will get messy again.  To make sure I know where the leak is coming from I lay down two puppy pads face up under the engine which will hopefully catch the oil and give a view as to where it is coming from.  The running of the engine is for another day though since we want to make sure that we don’t have a leak when the engine is cold. So next up is cleaning out the bilges of any water.  This could be from condensation, rainwater seeping in around the mast or from a problem with the deck drains or a problem with a through hull or pipe.  All will need checking out. 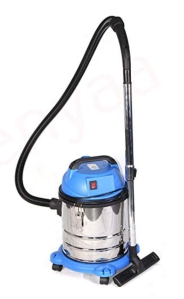 Maria has bought a cheap Wet and Dry Vacuum Cleaner

, she likes to shop does Maria! But it is very good and a little quicker than the manual hand pump that I have used in the past so I have begrudging admiration for her purchase.

Maria is on a mission going into every bilge armed with a hoover and cleaning out even a drop of water. She finds some water at the bottom of the mast, which is not unusual. Apparently it is very difficult to get a good seal around the mast, not least of all with the strains a mast goes through with the sails up.  Little regular movements would probably break anything that provided a water tight seal and the gaiter at the bottom of the mast protects from most of the water but some gets through.

We also have some water down by the keel bolts and this is soon gone. Finally, Maria decides that the grey water box is going to be spotless! First clean out the dirty water and then clean the box which looks amazing.  Just fill it with water to make sure that switch is working well and….. nothing… no pumping at all. Maria starts to apologise for cleaning our new switch and breaking it but it can’t be that. I check the connectors and everything seems fine, give them a little wiggle and the pump jumps to live. Right so a loose connection, quickly traced to the live wire. Firstly, I try to reuse the existing connector by bending it back using the new crimping tool, why do we try to botch these jobs?  Eventually, common sense prevails and I decide to put a new connector on it.

Unfortunately the small box of connectors I have is in the toolkit in the motorhome.  I ask Maria to pass me the keys without being clear and neither of us check, it is only after I have walked a couple of hundred metres to the far car park that I glance into my hands to find the keys for the land cruiser. Ok, all the way back, ask for the right set of keys, both of us check it and I return to the motorhome. Pull out the old crimper, you can’t have too many, and the small box of electrical terminators. It is only as I return to the pontoon clutching these that I recall that I bought a big box of terminators which is in one of the spares areas on the boat and I already have a much better crimper on the boat! So that is 30 minutes of my life I will never get back.  On my return, Maria says she thought it was strange that I wasn’t using the ones on the boat…. bless her for not mentioning it! New terminator and industrial crimper later and we have a positive connection that looks good.  Quick pull on the wires to check and the negative comes off in my hands. Seconds later that one is done too and everything is working as it should.

As we have been lifting the floor boards, one of those truisms comes to the fore.  I have always noticed that a “simple” job always seems to end up in a few more jobs. The cleaning of the grey water box was a perfect example. 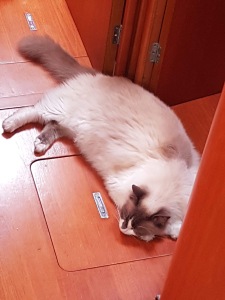 On this occasion, lifting the floorboard and the metal lifter comes off in our hands! This was obviously after Clyde had woken up! Right, longer screws required which is where my reputation as a hoarder comes in well. I have a box of assorted screws, bolts, nuts and washers collected over time.  Of course the one I am looking for takes some searching but it was never in doubt that I would be able to find one that sorted this latest problem out.

Now to see if we can trace the water leaks.  Quite often we have to bleed and prime the water pump for the air conditioning unit in the aft cabin.  Some of the water will be from this process but not much but maybe the pipe isn’t on properly and leaks when the unit is being run? A test shows that isn’t the case. The next test will be the engine.

So a couple of days later, it is time to do some more work on the engine and there is no trace of oil on the laid down pads. Right then, time for a proper test under load.  While in our berth we will run the engine under load for a period of time and see what happens then. Although, Mariadz is tied well in her berth, I decide to add extra springs to spread the load as the engine tries to pull Mariadz out of her berth.  We will be going astern, so away from the pontoon.  Probably better to be heading away from the pontoon if anything gives rather than straight at it! I have set the revs to a shade over 2000 which is good enough for five or six knots in open water and the lines are holding well. Ninety minutes later, we inspect the engine room…. to find some oil dropped off the front of the engine behind the alternator. I have never been so happy to see a problem, it means we can set about fixing something that has annoyed me for some time.

When looking at the front of the engine you can see a line of wet oil coming from where the domestic alternator joins the engine. I am going to ask Lindsay from Seapower to help make sure that we fix this properly but we will go the work together.  A few days later, Lindsay and I are looking at the problem.  It seems that the leak is coming from the cover directly behind the alternator so the alternator will have to come off.  Of course I have had to do this before when replacing the alternator the other year and hopefully the relatively recent fit will make this a simple job. 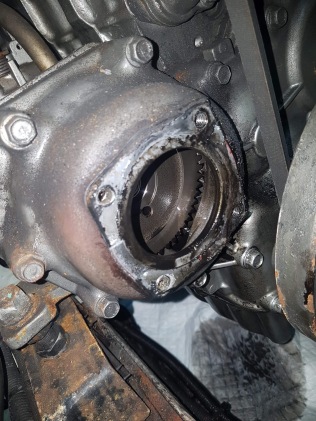 An hour later, the alternator is off, the cover is off and we can see the culprit. The gasket is damaged and oil is seeping between the cover and the engine block.  Something so simple.  We will get in touch with Yanmar and order a couple of these, fit, test and then we can set about a full service. Tune in next week for the exciting conclusion…. quite exciting conclusion… alright, conclusion.