It is always interesting to know what the range of your fuel tank is likely to be.  Although, that would normally presume that you run the fuel tank dry and after 17 years of use, and filling up in some less than savoury places, I imagine there is some junk in the bottom of the tank.  A friend of ours hadn’t considered this and was new to boating and emptied the tank.  This caused all sorts of problem for, in his case, a heater but could easily have been his twin engines.  A very good reason that one of the tasks before we go will be a complete clean of the fuel tank and to filter all fuel before it gets near the tank.  The general advice for ch coming fuel use is to take a note of the engine hours when you refill and compare to the last reading to get a view of average fuel economy. This becomes a little more complex when you also have a secondary use of the fuel such as a generator or diesel heater.

However, I think over a couple of fills you would have enough data to get a view of what the generator was using and what the engine was using, differential equations are your friend and had to come in useful some time! You could be compared to the manufacturers figures as a sanity check.

The last time we filled up was during the winter and I took a note of the engine hours so it was a little disappointing to see that these had not changed when we next came to fill up in July.  I had noticed this earlier obviously but it was absolutely confirmed.  Our usual seasonal hours on the engine is 125-150. Overcoming my disappointment at guessing at fuel economy again, I set about diagnosing the issue. The engine hour meter works off a 12v supply from the engine and this is powered when the engine ignition circuit is switched on.

Pulling the two wires that feed the meter out was harder than I thought but revealed the problem.  We had twelve volts across these when the circuit was on but no clicking of our counter.

So it looks like a replacement counter. I have tried to get one very similar to the original fit and they are a lot cheaper than you think. Fitting the Engine Hour Meter

should be quite easy and then power the circuit to test it. As you will see there is hardly any difference in the counters but it was a shame that I couldn’t spin it forward by the number of hours we already had rather than starting at zero. Well I guess I could if I connected it to a 12v supply for about 130 days!

Anyway, thanks to amazon prime, the new meter arrived the next day and I was able to go about fitting it. Having already checked the supply it was a simple job to crimp the wires and connect it up. 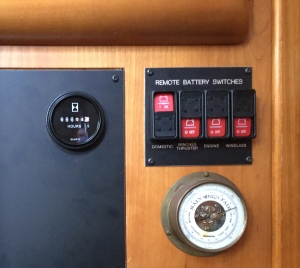 The advantage of having a similar design was it fitted into the existing hole perfectly. A quick test with the ignition circuit on and all is good – proven completely when we went out for the weekend and ran the engine for 4.85 hours on our way to Hamford Water.

I just need to remember to mentally add 3,300 hours to it or try and convince Maria that I replaced the engine as she wishes we had done at the start! Now to prepare for my differential equations…..