We have very much got used to our in-mast furling system on Mariadz, having learnt with this system ten years ago.  We generally have our techniques for avoiding sail jams despite having one for the first time in years a few weeks ago.

However, one of the issues with older sails is that the flap of sail that pokes out from the mast when the sail is away is exposed to the elements.  It gets filthy.  We hadn’t noticed this before because we had always been on newer boats or boats with newer sails but we decided something had to be done.  I tried to clean this last year with a neat solution of detergent and a lot of scrubbing and it came up a little but still looked weary.

With the recent success of Dettol Mould and Mildew Remover

on the cockpit tent and the anti-slip on the deck, where the black marks in the grooves were removed, I decided we should try this on the exposed part of the sail.  Mould and Mildew is a mild bleach and so I was keen to make sure that it wasn’t on the sail or any of the deck for too long before being washed off. 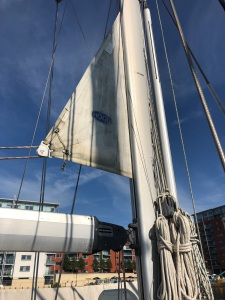 So mould and mildew was applied, scrubbed and then washed off with lots of water.  Afterwards, all of the decks were washed down so hopefully we won’t get any bleaching elsewhere.  This didn’t take too long and using lots of water and a couple of applications has really brought the sail back up.  I am almost tempted to try another application in a few days but the current results can be seen below. Maybe a need for a little more effort on the bottom of the sail….

You will also notice the fold down step-ladder that Maria got me for my birthday. She really is an old romantic! 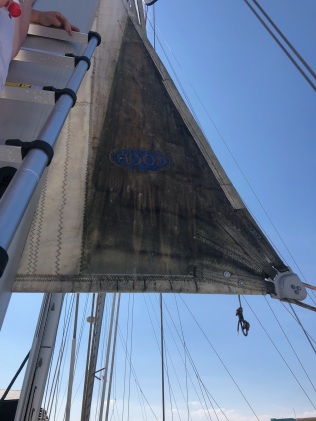 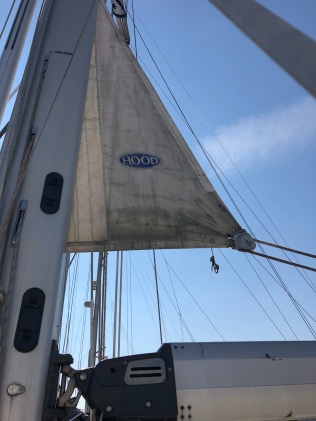