It is our intention to be insured while we are travelling around the world. However, nearly all insurers require that the rig is replaced every ten years and the rig on Mariadz was last done in 2010.  So we have agreed to get the rig refreshed as one of the last tasks we do prior to leaving.

At the Southampton boat show back in 2015, I had spoken to a rigging company about doing this work.  They claimed to have re-rigged a Moody 54 previously and were able to give me a quote….and it was eye-wateringly expensive.  It made me realise that 10% or 20% off an already inflated price was no bargain! I was also not convinced that I wanted to go to the South Coast to get it done anyway and this helped with the decision.

On the East coast of the UK, there was a rigging company with a good reputation called Rig Magic but they apparently stopped trading late in 2016 and so we needed another alternative.  I spoke to a number of people in the marina at Ipswich Haven and also spoke to the team at Spirit Yachts.  They introduced me to Richard at Evolution Rigging who at the time had rigged several quality yachts in Ipswich and also rigged Spirit Yachts and Oysters!  Maria has always had a view that if something is good enough for Spirit and Oyster then it would be good enough for us!  I was always a bit fearful of the costs of this approach but it has worked out well for us in the past.

I spoke to Richard about our rig and he explained some of the things we would need to consider, ably demonstrating his helpfulness and knowledge.  He also came back with a quote which was much more reasonable than the over-inflated boat show price from one of his competitors.  As part of his offer, he mentioned that there was also an upgrade available that would be 30% stronger than the standard rig for the same weight and size of wire.  This would cost an extra 20% on the quote but would give us more piece of mind.  Can you imagine not going for this option and then losing the rig at some stage!  It was a no-brainer for us.

check, even though we know we will be replacing it in the next year or so.  This would make sure we were safe in the interim.  At the back end of August, this was performed and as expected a few things came up which need rectification but nothing that was a safety issue (so lots of amber and no reds).  The check was very thorough and the written report backed up that we were safe enough for the moment and also identified some of the changes that they would recommend when we go for the full refit.

The other benefit we had here was watching the guys go up the mast.  You can learn a lot from someone who goes up the mast as their day job.  We noticed that the team didn’t lock off the line in the self-tailer but used the electric winch to help with the pull while pulling the line by hand.  This made the process less jerky and uncomfortable for the person in the chair.  A top tip for us, probably adding more comfort for me!

The deck organisers that help run the lines back to the cockpit were an issue.  These had all jammed which caused friction in the use of these lines.  We had noticed that the weren’t running as easy as usual but hadn’t linked this to the deck organisers.  Using Corrosion-X

, I was able to unjam these, 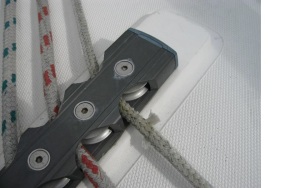 although I did also need to take the headlining down in the saloon to access the bolts under the organiser, some of which were on a bit tight.  Having freed these, it did make me think that we have more work to do with the rig and we will discuss replacing the clutches and organisers as part of the rig refresh over the next few years.  There were also a number of other easy fixes i could do myself such as tightening up the lines across the gates.  That was also being redone as we extended our pushpit.

We had also noticed that the block for the staysail outhaul was UV damaged and the plastic cover was shattering although the weight bearing metal elements of the block were still ok.  We decided to replace the obsolete Lewmar 72mm ocean block with an upgraded block from the current range and after speaking to Lewmar this was the HLX block.  These are stronger than the old ocean range and I was told to go down a size but, of course, this didn’t work for me because the attachment to the traveller track was 10mm rather than 8mm so I have gone back to the 72mm block which increases the safety margin even more.  At the end of the day, I took the decision to change this and if, after consultation with the rig team, it was decided to upgrade this even further then we have a spare block available.

I have now gone throughout the entire rig, checking all blocks and using corrosion-X to free up any stiffness in the block.  It was surprising how many were seized but also how easy they are to free.  This work included the stanchion blocks that run the headsail and staysail furler lines.  Interestingly, this seemed to have an immediate effect, in conjunction with lubricating the furler itself, and I have found these sails a lot easier to furl since doing this work.

So we now have confidence in our rig and a high level plan for its replacement which we need to finalise with Richard.  I believe as part of this we will replace all of the blocks that we have in the rig.  We also addressed a few things that will help to make it better in the short term and the thorough rig check was not expensive.