Everyone has some things they like and dislike about their boat.  There are probably two things that I can think of on Mariadz. The first is the wheel size compared to the gap in the cockpit.  The only way around the wheel is to go up on the cushions as there is no leg-width gap between the wheel and the seat.  The second is the amount of exterior storage in lockers etc.  This is minimal to the say the least and a lot less than we were used to on our previous Dufour 455.

In fact the outside storage space is the chain locker and the lazerette. We had previously partially addressed this by moving the life raft from its dedicated locker above the aft stateroom to a rail mount.  This gave us some space for the storage of flares, lines etc. Now clearly you cant go around randomly making new lockers on an old boat so we needed to get imaginative or more precisely steal others people’s imaginative ideas. One of these we saw on discovery yachts. A number of these have Fortress anchors as their kedge anchor setup, and after some research I had decided that this sounded the most sensible way for us to have a setup that could work for us with a twenty five tonne boat at cruising weight.  On the discovery boats, the kedge anchor was rail mounted which meant that it was mostly out of the way but also available quickly if needed.  The advantages were offset by the fact that you had a sharp, hard anchor that you could easily fall into but is this much worse than the pushpit rail? 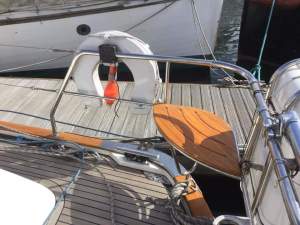 However, the standard Moody 54 doesn’t have much pushpit space with two liferings, a danbuoy and, for us, a life raft already on there.  With the davits also restricting options and two two aft seats taking up more room, it is a little tight to say the least.

Another issue related to safety which was that the pushpit stopped before the clutches for the head sail and staysail. This meant that you were adjacent to the lifelines when you wanted to use these clutches. A more solid barrier would be safer.  Maria and I agreed to extend the pushpit by four feet to the next stanchion 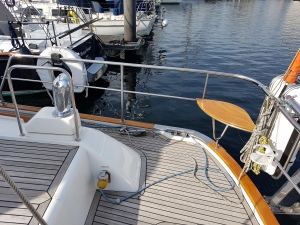 which gives us more room and a safer aft area.  This would also provide more rigidity to the pushpit when combined with the reinforcement we put in the stern section previously when we added braces from the davits to the pushpit.  The final item we needed to think about was the repositioning of the ensign required by the new solar panels.  This was also intended to be rail mounted although I was keen to go back to a wooden pole rather than the stainless one we had previously.

Once again, East Coast Stainless were asked to do this wotk and once again this needed to be fitted in amongst a lot of other work that they have.  I guess that is the problem when you are good and reasonably priced.  We are happy to wait and very pleased with the result.

Unfortunately, the work was a bit more than moving an angled stanchion and joining in a couple of tubes.  This was because we found some old damage on the stanchion itself which had a large dent.  This wouldnt be easily repaired and we knew that we would always notice the damage if we had just tried to repair it.  To be fair the cost of shaping a longer piece of metal rather than joining to the existing curved stanchion was reasonably similar anyway. 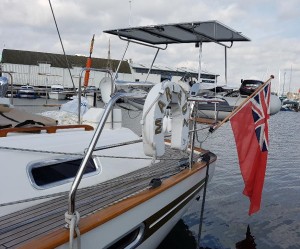 The finished job looks like it has always been there, just waiting for safety lines to be adjusted so that we can finish this part of the job.  The best part is you cant see the join between the new and old elements of the pushpit, very happy with the workmanship again!

So what will we do with all the space created? We already need to attach the ensign and putting it on the toe rail would probably cause issues with the lines running to the stern cleat so this is mounted to the pushpit.  We also have the anchor setup for the fortress and finally we have agreed, read Maria has decided (!), to add a holder for our Lotus grill so that it can be rail mounted.  This will be an adjustable mount that will allow us to stow it and then fix it for when we are having a BBQ.  More pictures to follow as these get fitted.