Having been caught in a storm in the English Channel previously (The return from Dunkirk (part 2 of 3) – pan pan), we are very conscious of safety and making sure that the crew are never put in unnecessary danger.  I know some people think this is overkill but our view is that if one the decisions we have made saves us once then they were justified.

At times, you will have to work at the mast, as well as go up it from time to time.  On the standard Moody 54, you are quite exposed at the mast, well as much as you can be on a big boat with good deck space. 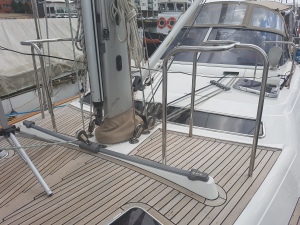 We wanted to have something that you could brace yourself against, for when you are working at the mast.  Although with in-mast furling, you do spend less time at the mast than you would with the lazy jack system we had previously.  An added advantage would be that this could also be somewhere that we could store our fenders, rather than on the pushpit or along the decks.  We looked at a few designs and were keen to have something that we could hold ourselves against while still being able to reach the mast and also use the winch on the mast if necessary. It would also provide a useful hand hold when walking along the deck.  I noticed this when I was walking back when they were placed there for show and naturally grabbed it for support. 🙂

Working with East Coast Stainless, we designed a frame that was in keeping with the rest of the boat.  We wanted to match this to the protective frames for the dorade vents (ventilation funnels).  The picture above shows them prior to fixing to the deck.

Once again we were very happy with the professionalism of East Coast Stainless making sure that the design worked for us and that they were fixed appropriately for safety.  Particularly with the fixing through the decks which at one stage looked like it would come through the deck exactly where the bulkhead was located.  We were lucky and the positioning that allows us to reach the mast puts the legs in places where they could be bolted through from the inside.

We now need to make a decision on whether we add anything to these for fender storage…..

One thought on “We’re getting old – Mariadz zimmer frames”