We are big fans of teak decks although recognise that they are not everyone’s cup of tea and can get quite hot in warmer climates.  Some time ago I checked our decks which have worn away and now have 5-7mm of wood left. Apart from normal wear and tear and the slight impact of our occasional two part cleaner (wessex chemicals), this is probably just a sign of an older boat that has fifteen year old teak. One thing I did notice was a large number of exposed screw heads.

Some of these had clearly never been recessed,  and so we wanted to cover these with teak plugs. I had borrowed a drill bit that was 10mm wide with an extended central point that makes the hole in the fibreglass under the teak but I was keen not to drill down too deep and was concerned that I wouldn’t have enough teak to hold the screw and allow me to cover it with a teak plug. 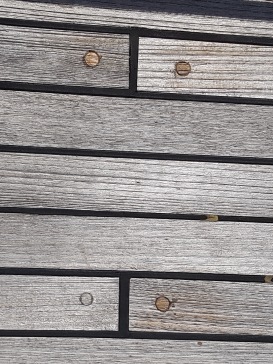 Having found 24 exposed screws, I reviewed each one for depth and available deck thickness. For some I could use a standard 10mm wood drill bit, resink the screw and still have some room for the plug but for the vast majority, I was removing the screw, filling the hole with two part epoxy and then adding the plug. The plugs were about 15mm deep which left a fair bit of plug exposed.  The trick then is to use a very sharp chisel, correct way up (!), to knock the top off the exposed plug and make it level with the deck. Prior to doing this there are concerns around the hard wood and the force that is likely to be required to cut the plug but a gentle tap on the chisel with the palm of the hand is enough to cut the plug. Doing the same from both sides will make sure that the cut is straight and flush with the deck. Twenty-four plugs later and your done, until you walk the deck and find a few more exposed screws that you missed… when finished I went over the plugs and adjacent deck with a light sandpaper and the end result is smooth.  The plugs are brown against the grey deck but this will change over a few weeks and the end result will be a teak deck with no blemishes! I also took advantage to repair a couple fostrips of teak that were breaking and hopefully the extra strength will ensure this damage doesn’t get any worse.

In conclusion, this was one of those jobs that I was a little concerned about but actually is very simple to do and takes little time.  Using the chisel gently and taking your time seemed to get good results.  Interestingly, half way through the process there is a panic about whether the holes are too big or too small but everything falls into place and now we shouldn’t get any water coming through the deck, never mind that it just looks better.