We have returned to italy after a few months to the most exciting part of the build from our perspective, the building of the trullo cones by Trullidream construzione.

The house is really taking shape away and the “rustic” build will be completed in the coming months.  This is the build of the walls and roofs, the framework for the home. The completion part of the build is the next phase when the doors, windows and internals are all completed.

The roof for the main part of the building has been in place for some time and our intention is to put a lot of solar power up there. This will help with the bills, to say the least, since we expect the power consumption of the house to be quite high.  In the picture the curved areas of the roof would be nearly all solar panels.  This would be hidden from anyone staying at the house.  Our plan would also to be to have a reasonably sized generator hidden around the side which would automatically kick in if there was a power issue.  The flat parts of the roof could have been a roof terrace but we understand that the health and safety issues would be too great so the roof will be off limits unfortunately.  One thing you can see from the view is that the building is about the same height as the olive trees and when up the all you can see is trees for a distance around the house. 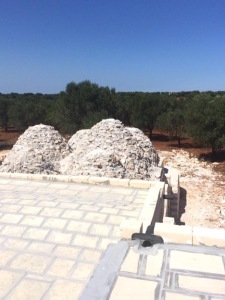 Looking over the trullo area of the build is not quite complete and Massimo at Trullidream Construzione has said that the outside of the cones will be dressed by the end of October.  Already you can see what these will look like and they will be an amazing sight.  As you can see the structure for all six cones is now in place and the outside will have the same uniform structure. Maria is now at the stage of thinking about the decoration at the top of each of the cones, there are a number of standard shapes traditionally used in the area and Maria is currently considering whether to have a cross on one of the central cones surrounded by the balls on the others.  Again this is something that needs to be agreed with the team doing the build and we are keen to keep the traditional feel of the trullo so will take advice.  Finally, and considering the recent earthquake in central Italy, the stone structure of the trullos has been reinforced with concrete anti-earthquake pillars.  Let’s hope we never need to see how well they work but it is reassuring that the possibility of earthquakes has been factored into the design to make the house safe.

The major progress over the last few months has been around the trullos.

It wasn’t that long ago that all we could see was steel reinforced concrete pillars and we couldn’t wait to see the stone work going up.  Part of this was the concern of whether the space in the trullos would be usable for a master bedroom suite.  A lot of trullos are very small but we wanted this to be unique selling point for the house, with the master suite combining five star luxury with a traditional feel. The outside being all stone will look amazing and the plan is to have a small “English” garden outside of the front of the trullo, partly as a nod to our background but also as a tranquil place combining with the Italian architecture. So we are more than happy with how the outside is taking shape but their was still the niggling concern about the size of the rooms and would it work. Pino, our architect, is a very talented man and so we didn’t have anything to worry 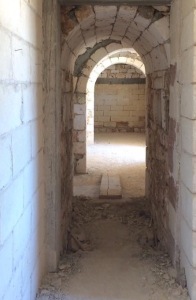 As you come into the trullo, the first cone to the side is a dressing room which is a good size, especially considering that this is being used for holidays rather than a permanent residence which would have a lot more clothes. The picture shows the corridor to the trullo and this is wider than it looks on the picture. The picture does show the flow into the first set of cones, the bedroom cones and finally the bathroom cones. One thing that cones give is height and this increases the feeling of space in the building.  To be fair this is true throughout the build with three kinds of traditional ceiling designs on show: stellar, curved and trullo cone.  All of these give height to the room. 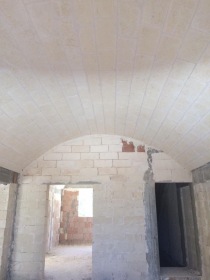 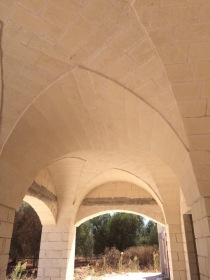 Returning to the trullo, we couldn’t be happier with how it is going, they are everything that we imagined although building a trullo from scratch is a skilled task, and hence more expensive, we have to say it is worth every penny. As we start to move forward with the internals of the house we will give more details on the bedrooms, kitchen, lounge and games room as well as the basement which should have a gym and storage.

However, that is all for later blogs. The key to a Mediterranean house is of course the outside living space, since this is where you spend most of your time.  The pool and sun terrace are very important but there are also covered areas outside which provide comfortable areas. The pool was designed to provide swimming, a play area as well as an area for chilling.  It is a standard depth all round which means that we could not have a dive board but does mean that games can be played in the pool without anyone having the disadvantage of the deep end 🙂 we also had the steps extended all the way round so that they became a terrace of sitting which also provides a perfect relaxed area to sit and chat whilst half in the pool.  Finally there is a jacuzzi area in the pool. A large area surrounds the pool which provides space for sun worshipping but also has areas of shade, particularly later in the day when shade may be a requirement.

This shot is taken late in the day when the sun has gone behind the trullo.  The jacuzzi can be seen to the right and the main sunbathing area has already been set up 🙂