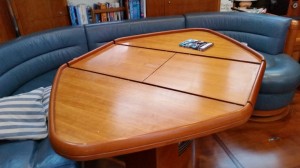 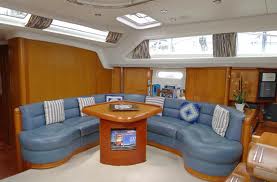 We looked at a number of options over a long period of time.  Removing the poor veneer on the table showed more fire damage and the original wood was blackened from fire.  We had success previously with the walls of the saloon being re-veneered and so we tried that, although the main part of the table was fine, there was a problem where the veneer got to the edges where the fiddle (grab rail on the edge of the table) was. We looked at whether we could put a fill in the corner so that the edge of the veneer would not show  but everything we tried couldn’t deal with the very tight curves on the corners of the table.

The overall design of the table is very good and the workings were still ok too.  In the end we were starting to think that we would need to have a new table built.  Our berth in Ipswich Haven Marina was adjacent to the Spirit Yachts area – the yacht made famous in the James Bond film Casino Royale. 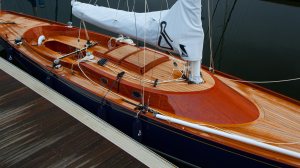 This unfortunately meant that Maria wanted something that wouldn’t look out of place on one of these. We spoke to a few people and Kevin was recommended to us. Kevin discussed options and he agreed that he could do something special with the existing workings of the table that would be a centre point of the saloon and would give Maria the table that she really wanted. Kevin spent a lot of time on the table and designed it with two compass roses when the table is extended with the fold out insert in place. When the table is smaller it has a single compass rose. Kevin quoted for the work and we were happy. We subsequently found out that he is a bit of a perfectionist, hence why Maria likes him so much 🙂 and he took the time to do a really good job even though it coincided with the birth of his child.  He cant thank him enough.  While the job was being done, Kevin had left us with a plywood top to our table base so that we could still use it while the work was being done.  In March, the work was complete and despite having to delay the install for a week because we were away, the install was ready to happen on the 19th March. Kevin had offered to send photos through but Maria was unequivocal in her desire to see the table for the first time when it was in place. 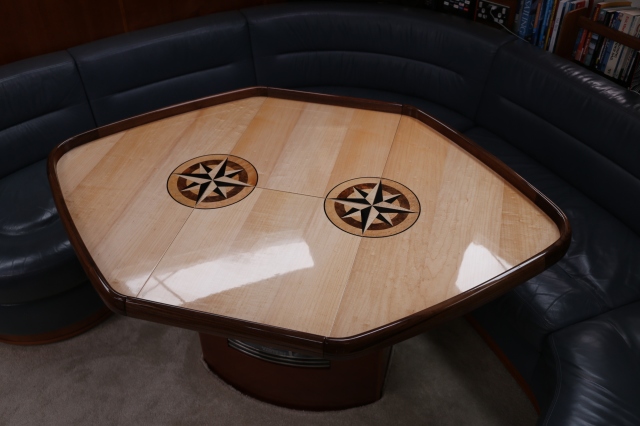 We are really, really pleased with the results. 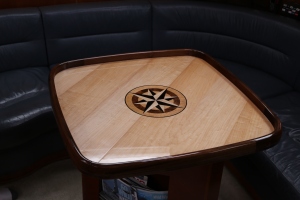 The table looks magnificent and we are glad we decided to go for the contrast with the rest of the wood in the saloon because it makes it even more of a centrepiece.  We have yet to see whether Kevin will decide to do some other projects for people, it isn’t his day job, but we can safely say that his attention to detail, eye and workmanship are fantastic and if he does choose to do more of this we are sure he will be a huge success.