During our ownership of Mariadz we have had intermittent problems with the aft grey waste box which is fed from the stateroom heads (shower and sink) and also the galley sink. These have usually been as a result of a stuck float switch in the grey water box that gathers it all together before it is pumped away. The result of this has been a bilge full of water, or water stuck in the sink/shower. In the past we have cleaned the grey water box regularly (more precisely Stevie from Watercraft UK has cleaned this out for us and cleaned up the float switch). Basically the scum from the shower and the sink waste after washing up were causing us problems. During the last winter, we decided that we would look at this setup and also upgrade the Whale Gulper pump. 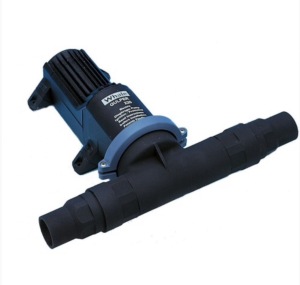 The upgrade was to use the toilet version of this pump.  This is equivalent to the more powerful of the two grey water pumps but has a much wider pipe, let’s not linger on why that is required for a toilet pump…..

However, we have started to have problems with the pumping out of grey water again. This started in the last couple of weeks and we noticed that the pump was staying on for a long time and not pumping much water out.  On investigation we found two of the non return valves, to sop the water going back into the pump and grey water box, supplied with the brand new pump by Whale had failed. One of them had turned inside and the other had a split in it. The first problem effectively reversed the non-return valve and so the pump was pushing against a valve trying to stop water going past.  A service kit with replacement valves fixed this problem, I will follow up with Whale though. For the next few days, the pump seemed to work ok, well pretty much as it did before. Then, we noticed the pump performance deteriorating again. We had never previously had problems with the pump part of the grey water system so this was particularly frustrating.

Olly from Seapower had fitted the pump and diagnosed the initial problem as I eagerly watched on. So at least I now knew how to strip the pump down and check for problems – and although the pump has been moved to be more accessible it is still a horrible job of fiddling with pipes and pumps under the floor in the bilge in difficult to get to places. I did this adding a little extra water to our bilge as I went :(. The good news was that I couldn’t find a problem with the non return valves. I decided to swap the top of the Whale pump with our old, working, Whale pump to see if there was a problem with the pump caused by our valve problems previously.  It did exactly the same. I put everything back together so I could show Olly, who was arriving imminently, what was happening. I retested…..now no water was going out, surely I couldn’t have reversed the valves accidentally when I put it back together? Thankfully I hadn’t. Olly and I worked together to try and diagnose the problem. Pump seemed fine, valves were fine (thankfully, that could have been quite embarrassing) but the outlet pipe seemed to be blocked. Now previously when we had the initial problem, Maria and I had put a hose through the this pipe to make sure it was clear but it now appear to be blocked.  When we repeated the technique, the hose water was bouncing back off something.  We went to the other end of the pipe at the  through-hull to see if we could see the blockage.  The pipe itself seemed fine.  However the through-hull seemed to have a problem. There was a ninety degree bend immediately prior to the through-hull so we took this off and found that there was a huge blockage in this. I then set about clearing this out. I found two plastic screw covers

(the ones that disguise screws and make them look like the headlining or woodwork. These had jammed across the pipe together, which was little wider than these at the bend. This stopped all flow, especially as they had been packed in with hair and assorted other gunk.  On cleaning this out we put the whole system back together and tested.

Previously, it has taken 30 seconds to clear the grey water box and at bad times up to two minutes. The pump started and I went up to the deck to check for the flow coming out. I peered over the side to see a dribble coming out, deflated I returned to the galley to talk through with Olly our next steps. He seemed happy and said that the pump had finished before I got there! In fact the pump had emptied the box in seven seconds! Even more amazing was that the pump emptied the box so fast that an emptying sink could not fill it quickly enough and so the pump ran and shut down and waited for more water before finishing the job.

So success. And Maria is happy to keep the boat because she can shower!

However, how could we stop these problems recurring. Some time ago we had bought a filter for the shower to stop too much hair getting through and this had worked well catching a lot of hair and needing cleaning regularly. I decided I wanted the same in the galley sinks.

gets you one of these stainless steel little puppies that fits the plug hole perfectly, has a very fine mesh that catches rice grains etc and looks like it is standard fit. So all those problems could have been averted for less than two pounds….